How to Trace Unknown Phone Numbers?

If you’re wondering how to trace unknown phone numbers, it can be challenging to know where to start. When someone withholds their phone number or calls from a VoIP, it may feel like there’s nothing you can do to uncover the caller’s identity.

Fortunately for you, we’ve put together a quick guide to tracing unknown calls so that you can find out who has been contacting you.

The Impact of Nuisance Calls

Nuisance calls disproportionately affect the most vulnerable people in society. Police Scotland estimate that 40% of all calls received by the elderly are either nuisance calls or scams. Even if you’re not considered vulnerable, some unwanted calls can still be annoying and distressing. You might feel violated or unsafe when you receive threatening, abusive, or incessant calls.

Scam callers are particularly vicious when it comes to impacting the mental health of their victims. These anonymous callers will pose as a legitimate company, like BT or Microsoft, and manipulate their victims into giving them remote access to their computers. From here, the scam could proceed in several ways, but it usually ends up with the victim’s bank account emptied.

Though not scammers, some people still make nuisance calls for financial gain. Telemarketers call hundreds of people in a single day attempting to sell some sort of goods or services.

Depending on the product, these calls vary in legality. Although often reasonably innocuous, the stress that repeated telemarketing calls causes can build up over time. It’s not unusual for these calls to come from the same source.

Finally, some people seek to cause worry and upset with no other apparent motive. These kinds of calls can be the most disturbing, making the victims feel particularly frightened. In these cases, it’s best to keep a record of incoming calls, including the dates and times of contact, and to show law enforcement your call logs as evidence of harassment.

How to Trace Anonymous Calls?

The method you’ll need to use to trace an unknown caller depends on what kind of call you’re receiving. This guide will take you through the most common call tracing methods and what you can do to uncover callers yourself.

When you receive a call from a withheld number, it will probably look like this: 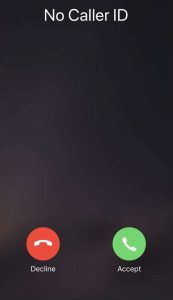 The function of withholding numbers is designed for professionals like Lawyers and Doctors who don’t want their number to be publicly available. By calling their clients and patients with a withheld number, they’re able to keep their number hidden. Unfortunately, this feature is open to abuse by malicious callers.

What Does No Caller Id Mean?

How To Check No Caller Id?

Fortunately, however, there are ways to trace these, even if it may not seem so at first. If you’re in the USA or Canada, the first thing you should try doing is dialling *57 as soon as the call ends. This will take you to a menu giving you instructions on how to trace the caller. It may be a free service or incur a small cost, but this depends on your phone provider.

How To Find Out Who's Calling You From No Caller Id?

If you’re in the UK like us, *57 may not work for you. In these cases, it’s best that you contact your phone company and explain that you’re receiving nuisance calls from withheld numbers.

They can stop withheld numbers contacting you, and they’ll also be able to conduct a trace on whoever is attempting to contact you. They may or may not be able to divulge the caller’s information, but they will be able to hand it over to the police on your behalf.

Can You Trace No Caller Id?

If you are searching that “is there a way to find out no caller id, you can check out here. It can be challenging, but not impossible, to track down a number that displays “No Caller ID” or “Unknown Caller.” If you ask, some service providers will be able to look up the number for you. It is crucial to keep in mind that a “No Caller ID” call’s capacity to be tracked may differ based on the nation and the service provider. If the number is a landline, it might occasionally be possible to locate it, but a mobile number might be more challenging.

How Can I Find Out An Unknown Number?

You can enter a phone number into internet tools and applications to get details on the owner, including their name and address. The websites Whitepages, Spokeo, and Intelius are just a few that provide this service.

You can learn more about a phone number by conducting a Google search for it. You can learn whether the number is connected to a company, a fraud, or any other publicly available information. You can also get assistance from your phone service provider in blocking the number or getting more details about the caller.

If someone calls you from an unknown number that is not withheld, the first thing you should try is looking the number up in a search engine. If it’s a legitimate business’ number, then you’ll get to the bottom of who is trying to contact you. Likewise, if it’s a known scammer’s number, it will appear on warning sites, which rate the toxicity of caller numbers.

Unfortunately, tracing some numbers is not as straightforward as this. Pay-as-you-go mobile numbers are only traceable by the police. Sometimes, the caller will avoid revealing their identity when topping up the phone by using cash to pay, for example. In these cases, it probably won’t even be possible for police to trace the call.

It’s never been straightforward to reverse-lookup a registered personal phone number, but thankfully there are ways of doing this. Online databases allow reverse phone lookups for a fee, which will enable you to find the registered owner of a mobile phone or landline number. These caller ID services provide the best way to reverse search a mobile number.

Can You Trace A No Caller Id Uk?

In the UK, calls made using the “no caller ID” or “private number” settings are typically impossible to track. Most phone providers lack the ability to track such calls, and this function is meant to safeguard the caller’s anonymity and privacy. Some third-party services might make the claim to be able to track these calls, but it is unclear how effective they will be, and they might cost money. If a call is placed using a VoIP service like Skype or WhatsApp, it would be possible to track it in some circumstances, although doing so would require the service provider’s assistance and might still be challenging.

Voice over Internet Protocol (VoIP) is a way of making calls through a broadband connection. Many businesses use them, as they offer a much cheaper alternative to the copper wire infrastructure needed for traditional phone lines. Sadly, many people also use them for illegitimate purposes, as scammers find the ability to spoof and change phone numbers quite attractive.

It is possible to trace a VoIP phone call, but it requires a significant amount of technical knowledge. You can use open-source network analysis software like Wireshark to trace the true origin of some VoIP calls. If the caller is using a secure VPN, then this becomes much more challenging.

In cases where the caller has gone to enough lengths to conceal their IP address, then you’re looking at grey-hat hacking as the way to uncover their identity. We can’t and don’t condone this because it is illegal.

If you’re struggling to get anywhere with your unknown number trace, then it might be worthwhile enlisting the help of a professional. Private Investigations UK offers number tracing services with a turnaround of fewer than 72 hours. Not only is it faster to hire a private detective to conduct a number trace, but it also guarantees more accurate results.

Private Investigations UK has conducted hundreds of successful number traces for clients all over the world. If you’re interested in our number tracing services, please get in touch with us on 0800 002 0898, or contact us another way.

PrevPrevious3 Step Guide on How to Trace Someone
NextFinding a Reliable Investigator in London?Next

TRUSTED FOR OVER 15 YEARS
All correspondence and intelligence is completely confidential. We never reveal the identity of our clients. We will never share any details of your investigation with third parties.

DO YOU HAVE A CASE YOU WANT TO DISCUSS?
It's important to us that we deliver the best service possible. Contact us to book a cost-free, commitment-free consultation, and we'll develop a plan tailored to your needs.

PEACE OF MIND
We pride ourselves on delivering safe and responsible services. All of our investigators and detectives are highly experienced and fully qualified. We adhere to a code of conduct and always carry out every investigation within the bounds of the law.

TRANSPARENT PRICING STRUCTURE
We never have any hidden fees and always ask for your permission before any additional cost are incurred. Please contact us for a free 30-minute consultation to discuss the cost of your investigation.

Free Consultation With No Obligation

We offer bespoke Private Investigation services in line with all requirements of GDPR and to the highest ethical and professional standards, with UK-wide service 24 hours a day.